The bot can detect if a game starts or has just ended, so every 0.5 seconds a screenshot of your OBS window has to be done. The bot will then check this screeshot with image recognition for the status (therefore the bot must always bring the OBS window to the same size). This is an optional feature.

The bot uses small snippets from the OBS window of your game. I call this snippets "Auto-Bet-Trigger". Since the bot should not read the whole window (it would take too much CPU power), you also have to set the OBS scanning area, the Bot helps you with the Auto-Bet-Trigger Editor, but you should understand the way to get best results.

To detect the "Game start, open Bet" moment of a World of Warcraft Arena game or BGs, the bot could use a trigger from the "loading bar" at the top of the arena, like this:

These are the extreme left of the snippet. So the bets can always start.

Upon detection of the end, or whether the game was won or lost, it is unfortunately a bit complicated for WoW Arena. The game (without special Addons) only indicates which team won (green or golden) and in the list is your character name is the appropriate color.

But we can also teach the bot to recognize this. For this we set the Bot to "Auto-Bet-Trigger System: Start/End/Team selection".

The bot needs now four different images. One for Team A / Team B won and one depending on what team you are (since the detection is not 100% accurate, cause of the scaling by OBS, it is also recommended to do a new trigger, if an error has occurred, to add as alternative detection images). This sounds complicated, but once you have the Bot "trained", you can easily just sit back and play. The rest is automatic. 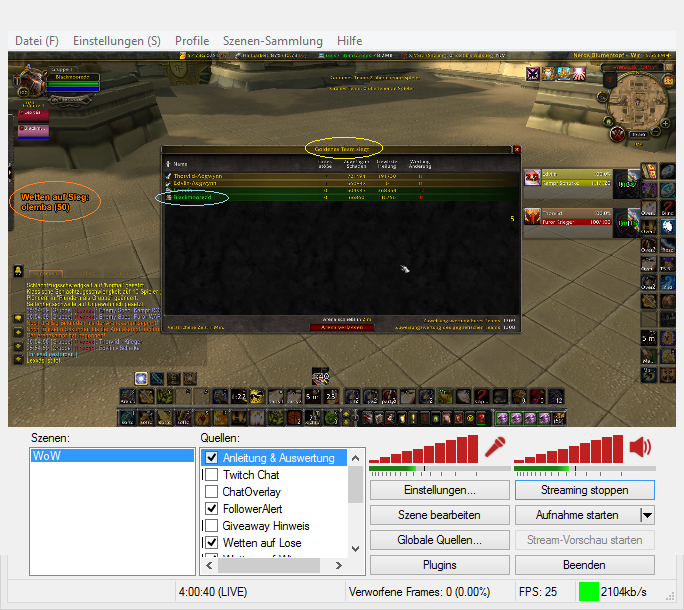 To identify which team won, the bot can recognize the font color at the top of the statistics screen (highlighted in yellow above on the original OBS Screenshot).

Additional a trigger from the table for each character has to be made, here my Paladin named "Blackmooredd" (highlighted in blue above on the original OBS Screenshot)

You are in Team A

You are in Team B

In LOL, recognizing the Game start, open bet is unfortunately dependent on the card or the loading screen. I have always used the "VS" from the middle of the loading screen. But there are certainly other possibilities. In LOL unlike WoW no team selection is necessary, therefore, set the trigger setting to "Start / End".

In another map, the background is dark, so you must also produce another trigger:

I would recognize the end of a League of Legends game on the statistics screen. So a fitting screenshot with an appropriate value for the viewer can be uploaded directly into your game history.

The Statistics screen depends on your language, but otherwise should always look the same. But caution, by the scale of OBS there could be problems anyway. Watch out and just do a new trigger and add it as an alternative, then it very quickly without errors.

For the victory detection the "Victory" Text from Statistics screen is good:

With defeat, it's actually the same: